I’ve been impressed with the Thomson HD boxes, used for Czech Skylink tv, the menu system is good, clear and easy, the same can be applied to the latest Thomson Fransat receivers, which are very very similar.

If you’re intending to use just the French channels, then go to the Automatic installation part of the install menu and it is set up in no time.

If however you’re hoping to install on multiple satellites, as I did the other day, it will work but there are a few things to note. First on the setup Antenna page, set up different  “dishes” for each of your lnbs. For example, if you have 5w for Fransat, 13e for Hotbird, 19e for Astra1 and 28e for Astra 2 set up dishes 2,3 and 4 as follows:

Save ( choose coloured option at the bottom of the page )

Then return to the install menu, set up each satellite with the appropriate “dish” and you should see the Signal strength and Quality bars light up, if all is well.  If all of the lnbs are ok, then proceed to Scan, selecting Free option for TYPE and TV , Radio or ALL as desired.

When the scan  completes, it will show “wait for storage”

But …. where are the channels you’ve just scanned? Here is the change from previous models of TNT and Fransat box, they no longer show up at channel 1000 onwards. They are only visible in the edit channels and edit favourites menu. When set up, you simply press the FAV button , to access them. The box is now organised to separate into groups from the tuning menu.  In one way this is good, it makes you organised. But if you’ve just scanned Astra 1, there are a LOT of channels to go through to find the ones you wish to store as your ‘favourites’  .  I do this a lot and it took me hours. I can imagine that if you are not familiar with the huge list of channels, it would take you an age, to put the fav icons to mark your channels. There is also no indication of encryption when you do this, so you could  easily mark an encrypted channel, several are  duplicated on the Astra 1 satellite, some free, some encrypted, so you end up with a list containing many blank , encrypted channels.

Then you proceed to the second, third and fourth satellite, each time the channel list get longer and the time to go through the channels increases.

On this particular occasion, the customer bought 2 boxes so I had to go through this procedure twice!  Here another little glitch occurred and I still have  no idea how to solve it. On box one, each satellites channels stayed together, on box two, they appeared in alphabetical order. I had several  tries to change this, to no avail. It probably depends on the setting at the time you scan the channels in. I will update this post, when I find out. The problem this created was each time I added a satellite, the second boxes channel list (  alphabetical ) was getting longer and longer so finding the channels to add  to  a fave group became much more difficult. With the first box, the channels remained together, so Astra 1 channels went from say 300 to 600, Astra 2 from 601 to 1100, Hotbird from 1101 to 1200….. so finding for example ,the Italian channels which are all on Hotbird, was comparatively easy on box one.

There is no way to store the channel or favourite list, as there is now on many FTA free to air boxes, using a memory stick or as previously, copying from one box to the next.  This is a serious omission and I would advise anyone to  use an alternative like the Technisat receiver , if you want an easy life, although its more expensive, you can update your customers by email, you can provide like I do, a  backup system which is easy to use. Also in terms of time, when on a call out, the system can be rebooted, factory reset and reprogrammed in less than 10 mins. With the Fransat boxes you would be hard pressed to do the same on a multi satellite installation in less than half a day!

How did the Thomson Fransat fair. Well, very well indeed, crystal clear pictures, on French  and Spanish and German and English channels, it recorded well. It was easy to use, my customer picked up the changes straight away and was able to record and playback without any difficulty. Unfortunately due to  slight change in the format, the French box was unable to playback any of his previous  recordings, but they were available from the disc, via a  laptop, if that is important to your needs. The playback of  recordings was to be found either  via the menu and ‘files’, or using the OPT button.  As with all other French boxes, the epg is simple and primitive, I can’t believe that they haven’t implemented a 7 day system.

My final gripe, is to do with  the diseqc switch implementation. Simply put diseqc 1.0 no problem. Diseqc 1.1 forget it, it does not work! So you are limited to 4 lnbs max. Presumably Thomson will correct this in future firmware updates.

Overall, I like the Thomson box and having installed so many Czech Thomson boxes without problem, i’ll continue to recommend it as , easy to use, easy to install and dead reliable. Price wise it sits at the top end of the competition, but it is currently ( sept 2017 ) on offer, so very similar to the Strong box price. For French only, or maybe French and Spanish channels,  I’d have to say go Thomson. For any more satellites, go for the Technisat.

All of the Fransat receivers i’ve supplied for the last couple of years have been HD so this is an update to the Fransat page:  Be Aware that Fransat is planning to go ALL HD in the beginning of next year !

The latest in the Strong production line is the SRT7405 , very neat small box, very easy to install, probably the simplest of all the French receivers. Menu can be set to English as well as French, making it even better for us language learners! Software updates will occur, from time to time, as always be aware of it and allow it to complete. The  7405 has many video standards, you can select:

For viewers wanting to combine Spanish and French or UK and French, the order of the channels will be fixed – first 50 channels – Usual French starting with TF1, France 2, 3,4 …..

Lastly 1000 up is where any other channels will be located.

The easiest way to organise any other bouquet of channels would be to store them in a Favourite group which is very easy to do and simple to access using the FAV button.

Although there is no way to make a backup of the channels, like with the Amiko or Technomate receivers, the Strong does organise the French channels totally automatically. So if you suffered some problem in the future, choose Factory Reset from the system menu and reinstall from scratch. Then all you need to do is tune in any other channels ( Uk /Spain …. etc ) 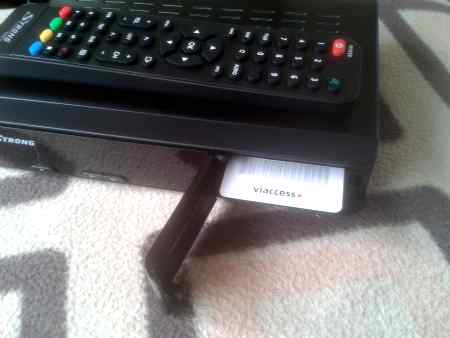 Like all Fransat receivers, the card has no expiry date and you receive all the common TNT channels including these HD ones

May 2011
FranSat receives its signal from the Atlantic Bird 3 satellite, roughly due south. The range of receivers by manufacturers Aston, Wisi and Visiosat now includes HD types, for the 4 current HD channels ARTE, France2 , M6 and TF1.

I am currently able to supply the Visiosat model Meosat 101S, which has proved very reliable with quite a few installations this last 12 months, so I can recommend it. It seems quite well made, the remote is responsive, all the boxes so far, found the OTA ( over the air ) software updates, as soon as they were plugged into the dish and tuned in, so I am confident that there will be no surprises for my customers. Sometimes with non Uk broadcasts, the OTA updates will require the user to act, by resetting or retuning, but the Fransat boxes by Visiosat are well behaved.

Very little setting up is required ‘out of the box’ and any adjustments can easily be corrected later from the main menu. 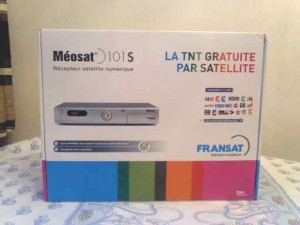 It is the easiest of the available french receivers to install, one ‘ok’ from the remote tunes all the channels. Enter the menu to set the box to the tv aspect – either 4:3 for old tvs or 16:9 for widescreen. France3 has all the regional channels available so choose your favourite region and you can move it in the channel list to your chosen position.

In operation the channel list button brings up the list of channels in the bottom half of the screen , you can select from there and ‘ok’ to change to your viewing choice. Although there is a ‘favourite’ button system, I found that the channel list was quite manageable with all the channels in it , some 30 in all, when most of the France3 regional ones were eliminated. Overall an excellent product.

The mains lead of course is a two pin continental type, when I install , I  provide and fit a permanent adaptor for Uk mains sockets.

I have seen major software problems with other makes of TNT /FranSat box so I always make certain that the properly aligned dish is plugged in before applying power, just in case it starts the install immediately. In two instances, with a TNT box ( not supplied by me ) , the units could not find the satellite, went to update and ended up having to be returned to the  manufacturer…. so be warned! 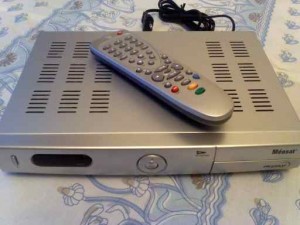 The card should be left out until the unit is tuned and updated, then select a scrambled channel like TF1 ready to test the card. 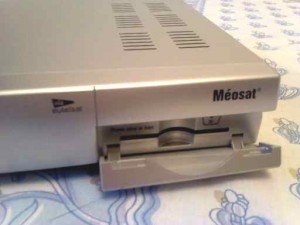 Meosat card slot is behind the pull down cover

Insert the card with the logo upwards. The TF1 picture and sound should appear instantly. 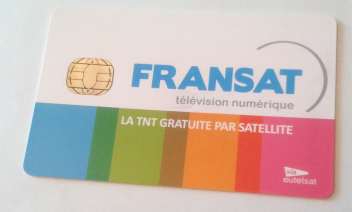 According to the official FranSat website: There is no expiry date on the Fransat card, so its a once only payment and the channels will remain free. If the Fransat encryption is hacked it may be that new cards will be issued….