Canal Plus and Canal Sat Channels

After 18 months of talks to agree fees, between TF1 and Canal+ , a stalemate has been reached and Canal+ will now cease to carry ie broadcast the TF1 channel.

TNT sat and Canalsat are both affected, so don’t worry, your receiver and card is not at fault.

In a press release Canal+ announced “it was terminating the distribution of the TF1 group’s channels because it could not reach a commercial agreement with the group, whose “unreasonable and unfounded financial requirements”

The TF1 group includes the channels TF1, TMC, TFX, TF1 Séries Films, LCI and their associated services, so expect that these channels will not be back on air until an agreement is reached.

Previously the TF1 group provided the services free, but now want to charge a fee. Canal plus is refusing to pay their fees and it has sued the TF1 Group before the Paris Commercial Court to contest its claims. In 2017 it  filed an appeal with the Conseil d’État against the CSA’s decision to simplify the renewal of the TF1 agreement that the latter had announced its intention to change  its method of financing.

TF1 is accused of abusing its power, it was granted the national frequencies and  number one slot in French tv public domain and extensions for all its other channels. Plus as it enjoys these benefits and has regulatory advantages specific to free channels re the broadcasting of big sporting events for example the Football world cup. Canal Plus are contending that it is the viewers who will suffer under this unreasonable demand.

The French ministry of culture has demanded that Canal+  resume its distribution of TF1 by TNT satellite as there are at least  one and a half million French households which can only view  the channel by satellite.

Viewers in France who receive via aerial ( terrestrial )  meanwhile have seen TF1 move from its regular no1  channel to number 51 as standby frequencies are brought in to fill demand while the broadcasters fight it out.

How to get your Canal+ viewing card

If you purchase the TNT receiver and installation, there is an introduction leaflet explaining how to go about applying for the Canal+ card. Also details of the channels on offer from Canal+

Canal Plus on your TNT box 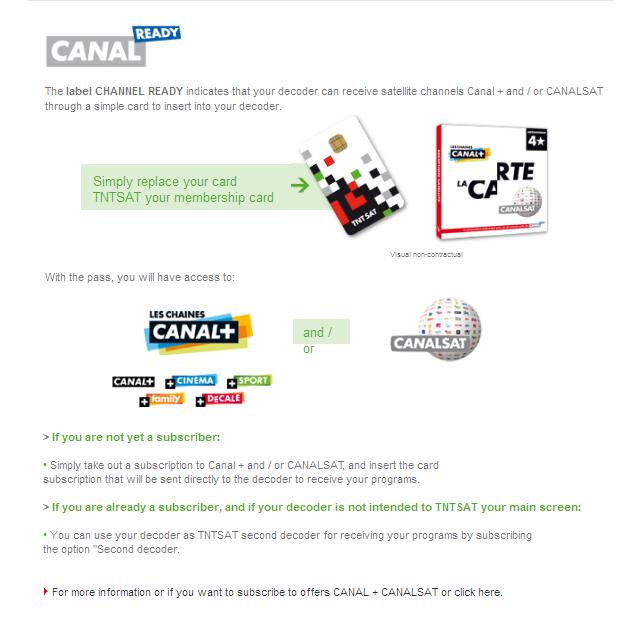 So the CanalPlus channels +Cinema, +Sport, +Family and +Decale ARE available using a Canal Plus card in place of your TNT card , in your TNT receiver BUT signing up for Canal+ is very restricted, you must sign up in France, with a French address.

The Canal Plus channels do show up when tuning in the TNT box ( or any FTA satellite receiver ) so are receiveable anywhere in the Uk.