I recently installed a couple of multisatellite systems, both in Peterborough within a few weeks of each other , one done with a Technomate TM5402HD receiver and the other with a Humax TN5000HD  TNT Sat receiver, here is a comparison of the results and problems, which might be of help to anyone deciding which way to go.

My customers were interested in slightly different priorities of channels one Spanish and the other French, but the comparison is useful for anyone wanting French Channels.

95% of French Channels are available free,  but they are spead over different satellites, so needing quite a complex array of LNBs on the dish to get the maximum range of available channels. France4 is the only major channel missing from the free range of channels. The TNT box of course will get all the major channels from the Astra satellite alone, so how good is it when setting up for German, Spanish, Italian, Greek etc as well as its native French channels?

Firstly the Humax is designed to auto set up TNT channels  from Astra1  and order them in the usual TF1, France2, France3 ,…… order, but has options for many other satellites to be included in the antenna setup menu. Our installation included Thor5, Eutelsat W3, Hotbird and Astra 1 with a 4 way diseqc switch. This was very easily accommodated on the Humax menu, simply entering the appropriate number associated with the 4 LNBs. 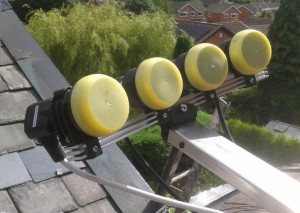 Triax manufacture attachments to install up to 4 LNBs on their standard range of dishes.

On exit from the Humax menus, you are prompted to Confirm, this doesnt default to ‘Yes’ so be careful when finished any sorting, or tuning, that the operation is saved. The remote keys are a little quick to repeat if held down, you can easily dismiss this dialogue when hitting the exit key.

Tuning was reasonably quick on the Humax, although much slower than the Technomate HD receiver. Turning the Network search off, helped to speed up the operation. Searches could be done on the TNT channels, A single transponder or Automatically all transponders on a satellite. Strangely the TNT search was very ponderous, taking a long time and not showing any results until the very end.

As with most of my installations, I will put the main channels from each country into a different favourite group, for ease of use. The Technomate has a really easy to use grouping method, grouping can be done in any order, the lists can be shown in number or alphabetical order or CAS or transponder order. By comparison, although not too bad by many standards, the method on the Humax was a little awkward. First you create a new group and name it. Then once in list mode, you can mark required channels using the pause key, then press ‘OPT’ to save channels to your new group . Make sure you confirm on exit from this procedure.

One disappointment is that the Humax will not group channels from different satellites, so for example the Turkish channels of which one is on Astra, the rest of Eutelsat, couldnt all be put into the same group. The Technomate achieved this easily.

The Technomate 5402HD is a great value HD receiver, popular with satellite enthusiasts because of its price and facilities. Its menu system allows all the usual tuning, grouping of channels and other communications setups like the USB memory stick/HDD etc. Once you have the receiver set up as you like, the settings can be stored simply and quickly on a USB memory stick. Go to Menu/system/USB/data transfer and the channels and favourite groups are stored by pressing (red) on the remote. The opposite function, restoring channels etc. is achieved by highlighting the saved .chdf file and pressing ‘OK’ to restore it. After rebooting the operation is complete. The Technomate Software website is full of useful addons which enable more functions on the 54o2 and other models to do streaming to tv and more.

The transponders listed on several satellites on the Humax were unfortunately out of date, although the options were there to enter details and scan for channels on new transponders, this process was tedious and slow. On the Technomate, there is ‘BLIND Search’ which will tune any new transponders quickly and automatically. I wish manufacturers would include the facilities to save settings via USB, use a channel editor to include quickly any missing / changed  transponders and create a backup file, which can be quickly restored , should the worse happen!  Speaking of which… during the installation, I made the mistake of entering the ‘first time’ setup menu, during tuning and ordering of channels, which wiped out all my work! So beware, there is no confirm dialogue on this menu.

The installation for French channels done on the 5402 had to include the satellites Eutelsat 5w, Hotbird, Astra1 and Eutelsat 9a, to get all the channels which are enabled simply with the viewing card on the Humax TNT box. So the Humax scores well here as the other 3 LNbs can be set up on a range of different  satellites.  But at nearly twice the price of the Technomate, is it really a better deal? Certainly the pictures are good on both receivers, no complaints there, each one will tune in most of the same channels , from France and elsewhere, both handling the HD channels well. My experience of the Technomates shows that the tuners are the best on the current market, several times when installing weak satellites ( Czech channels on Astra 3, Nilesat and BADR4) other receivers have shown picture break up or in one case no channels at all, the TM displaying perfect rock steady pictures. I know if I had to choose when installing for French AND say Nilesat, it would have to be the Technomate receiver.

Adding a HDD ( Hard Drive) for recording. Both receivers have USB connections for use with portable PC drives to record programmes.  As long as you use the drives recommended by TM technical, no problems with recordings have ever come up. In the case of the Humax TNT box, I used my usual Western Digital HDD, a 500Gb size drive. Recordings were good, very smooth in playback. Pressing the play key, brought up the list of recordings on screen. Titles, dates and channel were all stored making selection and sorting of recordings very easy. Setting up the drive was easy and automatic, once it was prepared correctly. As with the Technomate receivers , the best method is to use my GUI software, download it here http://www.satellitetveurope.co.uk/HDD.html    it certainly worked with both the installations above. Plug in your new drive to the pc or laptop USB, note the drive letter assigned to it, Download Gui software,  and run it to properly prepare the HDD for the use with a satellite receiver. I found out recently that 500Gb is realistically the largest size that will work properly in the TM receivers, as the 1 TB size drives slow down the operations too much to work correctly, so best to stick to this size with the Humax as well.  With the 5402 receiver dont expect to be able to record from a Guide menu, not all foreign broadcasters have the same format, or even any Guide! ( Spain ) . Germany at least on their main channels has a fully implemented 7 day Guide broadcast.